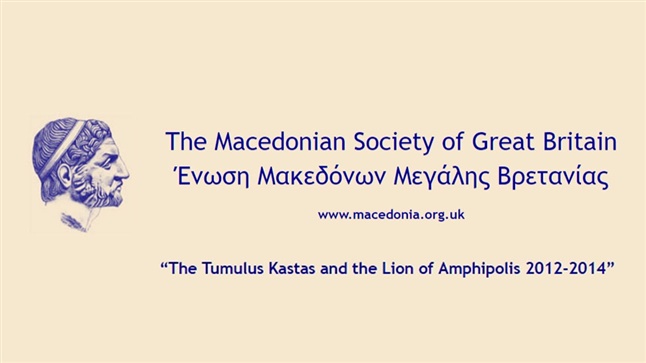 Re: “FINAL AGREEMENT FOR THE SETTLEMENT OF THE DIFFERENCES AS DESCRIBED IN THE UNITED NATIONS SECURITY COUNCIL RESOLUTIONS 817 (1993) AND 845 (1993), THE TERMINATION OF THE INTERIM ACCORD OF 1995, AND THE ESTABLISHMENT OF A STRATEGIC PARTNERSHIP BETWEEN THE PARTIES”

The Macedonian Society of Great Britain is strongly opposed to the proposed agreement between Greece and the “Former Yugoslav Republic of Macedonia” regarding the resolution of the name dispute between the two countries.

The recognition of the “Macedonian” nationality and language is an insult to the people of the historic region of Macedonia, in northern Greece, who carry the Macedonian history and culture for more than 3000 years. The people who claim the “Macedonian” national identity are of Slavic origin. They descended to the region more than 1000 years after the peak of the ancient kingdom of Macedonia and have no right to claim any part of its heritage.

The language and nationality claims have always been at the core of the dispute. It can be argued that the language and nationality are more important than the name of the country itself. They legitimise the falsification of the Macedonian history and the creation of an artificial nation which only exists to serve geopolitical and economic interests. In this context the proposed agreement is totally unacceptable – it simply surrenders a big part of the Greek heritage. The consequences of this agreement may be d i r e for the Greek nation.

Most importantly, this agreement is not a safeguard for the stability of the region. On the contrary the co-existence of two separate entities with a Macedonian identity leaves the door open to new tensions and disputes in the future.

There are some concessions made for the first time by the other side, such as the use of the new name “erga omnes”, acknowledging the Greek heritage of Macedonia and promising to remove ancient Greek symbols from their state. However, we consider them as of lesser significance and only a minor step towards an acceptable agreement.

The Macedonian Society of Great Britain, founded in London in 1989, is working hard for 29 years to educate the British public about the true, Hellenic history of Macedonia. The Society is organising lectures, presentations and panel discussions with well-known historians, academics, journalists and politicians, all open to the general public. These events keep alive in the public consciousness the fact that although the Macedonian name has been misappropriated by a foreign people, our identity cannot be.

We urge the Greek people to show their objection to this agreement by any lawful means; by taking part in the protests that are being organised by Macedonian Associations in Greece and abroad, by contacting their local MPs and by promoting the true history of Macedonia on social media.

The Executive Board of the Macedonian Society of Great Britain