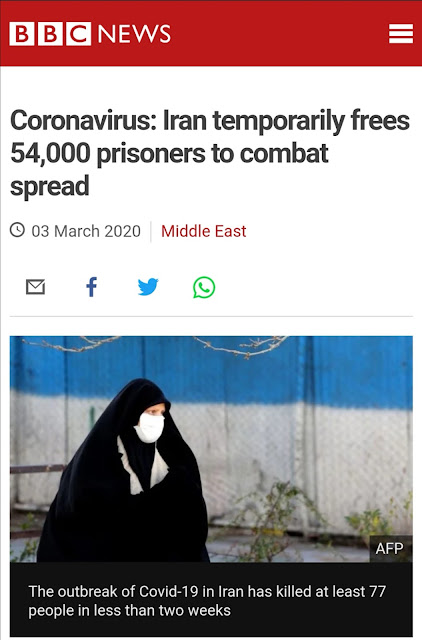 Iran has temporarily released more than 54,000 prisoners in an effort to combat the spread of the new coronavirus disease in crowded jails. (Comments: In other words Iran does not care about its population and the rest of the world, if they become victims of the prisoners. What a crazy idea. Instead to isolating them Iran releases the criminals).
Judiciary spokesman Gholamhossein Esmaili told reporters the inmates were allowed out of prison after testing negative for Covid-19 and posting bail.
“Security prisoners” sentenced to more than five years will not be let out.
The jailed British-Iranian charity worker Nazanin Zaghari-Ratcliffe may be freed soon, according to a British MP.
Tulip Siddiq cited the Iranian ambassador to the UK as saying that Ms Zaghari-Ratcliffe “may be released on furlough today or tomorrow”.
Her husband said on Saturday that he believed she had contracted Covid-19 at Tehran’s Evin prison and that authorities were refusing to test her.
But Mr Esmaili insisted on Monday that Ms Zaghari-Ratcliffe had subsequently been in contact with her family and “told them about her good health”. (Comment: That does not pacifies the doctors and the health sefrvants).
Ms Zaghari-Ratcliffe was jailed for five years in 2016 after being convicted of espionage charges that she has denied. The UK has also insisted she is innocent.
A Foreign Office spokesman said: “We call on the Iranian government to immediately allow health professionals into Evin prison to assess the situation of British-Iranian dual nationals there.”
Πηγή :https://www.bbc.com/news/world-middle-east-51723398
Δημοσιεύτηκε 9 hours ago από τον χρήστη SCRIPTA MANENT