Canadian Truckers Take Back Country from the Great Reset: <<We aint gonna take it anymore>>

A convoy of roughly 50,000 truckers and their supporters are piling into Ottawa this weekend to protest Prime Minister Justin Trudeau’s jab mandate.

Trudeau’s mandate orders Canadian truckers to get the injection or face a 14-day quarantine every time they cross the US border.

The Freedom Convoy and hundreds of thousands of supporters have surrounded Parliament Hill on Saturday despite below-freezing temps to demand Trudeau lift all draconian COVID restrictions.

The live show feed will be included here, so bookmark this page for updates and tune in to these live streams documenting the Canadian Freedom Convoy in real time.

The historic protest was organized by Canada Unity, and the U.S. anti-mandate group Freedom Fighter Nation has also joined in solidarity. 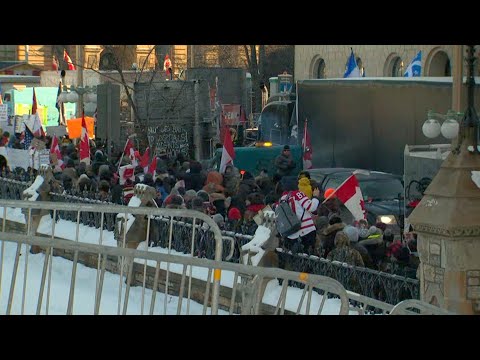 Dozens of vehicles have already blocked the roads in front of Canada’s Parliament buildings as more protesters continue to stream into the city. 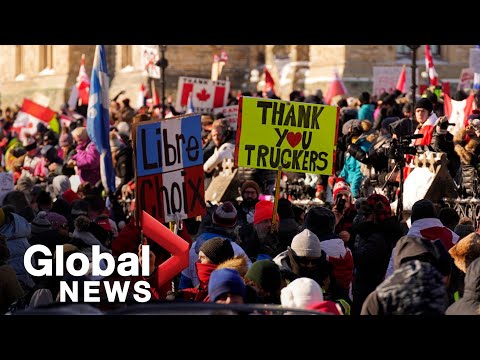 The truckers had spent the last week amassing supporters and crossing into Canada to Ottawato air their grievances against Trudeau and his tyrannical vaccine mandate. 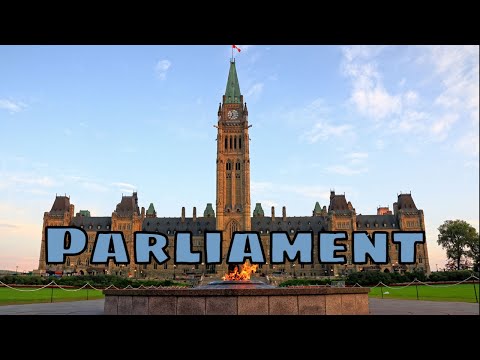 Trudeau has reportedly relocated from Rideau Cottage to an undisclosed location for “security reasons”, coincidentally just as he announced he had contracted COVID.

“The Prime Minister is continuing to isolate in the National Capital Region & work remotely. We’ve consulted Ottawa Public Health on appropriate protocols. As always, we do not comment on security matters,” stated Trudeau’s office.

Trudeau called the truckers protesting in Ottawa a “fringe minority” with “unacceptable views” earlier this week, despite the support from famous figures like Elon Musk and Joe Rogan.

The truckers have stated that they won’t leave Ottawa until all COVID restrictions are lifted, and given Trudeau’s hardline defiance against them, that could take weeks or more.

One leftist masked person brought a sign accusing the trucker march of being “white nationalist”, but a local immediately demolished that weak narrative on video.

The anti-COVID tyranny protests have spread across Canada over the last week, with videos from Vancouver to Toronto showing massive numbers of people marching in solidarity with the trucker convoy.